As we come to the Year of the Ox, in order to create a joyful and peaceful holiday ambience, deliver the corporate culture of China Re Group, enhance group cohesion, give blessing and convey greetings to all employees at home and abroad, retired Party members and comrades as well as needy Party members and employees who have worked hard for the reform and development of the Group, and actively respond to the central government’s normalised epidemic prevention and control initiative on “Staying for Celebration of the Chinese New Year”, China Re Group’s unions, together with grass-root union organisations at all levels, for the first time planned and organised a Chinese New Year celebration event “Ox Turning the World in 2021 ” for the online participation of China Re people making use of new means of online media. All the China Re people actively participated in the event and welcomed the Chinese New Year together.

This event presented an online gala event integrating multiple elements and perspectives of “Retrospect and Prospect, Achievement and Expectation, Harmony and Magnificence”, praising the great leadership of the Party and the superiority of the socialist system, demonstrating various achievements and demeanours of China Re people in terms of comprehensively and strictly administering the Party, deepening reform and development, winning the battle against poverty, defeating the COVID-19 pandemic, and enriching the cultural life of employees. This was the first gala event in the history of China Re Group that all employees took part, and it was the first reunion of the people of China Re worldwide! 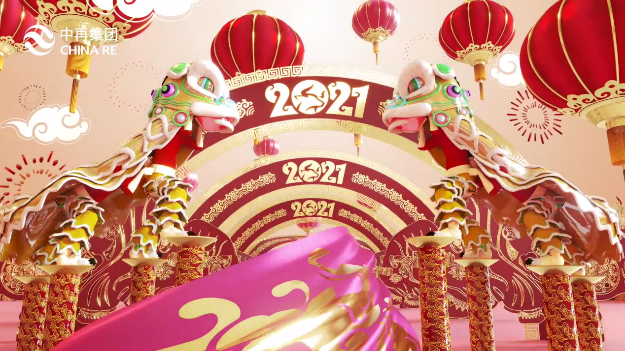 At 15:00 on 7 February, with the opening of the festive and majestic Spring Festival overture, the 2021 online Chinese New Year celebration event kicked off the global simultaneous live broadcast. Yuan Linjiang, Secretary of the Party Committee and Chairman of China Re Group, sent a warm letter of greeting to all the China Re people on behalf of the Group’s Party Committee. Looking back on 2020 and ahead into 2021 in the letter of greeting, he extended his Chinese New Year greetings and blessings to the employees, old comrades, and employees’ family members. He also placed good expectations on the Group in setting up the game and starting well in the first year of the “14th Five-Year Plan”. The county committee and government of Xunhua Salar Autonomous County of Qinghai Province expressed their sincere gratitude to China Re Group for its continuous assistance and sent holiday blessings to all the people of China Re. All units of the Group system and overseas institutions took turns to show up, sending messages on the Group’s development as well as Chinese New Year’s blessings to all China Re people. New enthusiasm for the Group’s culture and sports had been aroused among associations in the system with sweat and laughter. In the interactive activities, old and new calligraphy artists from the Painting, Calligraphy and Photography Association of China Re Group gathered together to write the most precious blessings for the development of the Group and the happiness of employees. 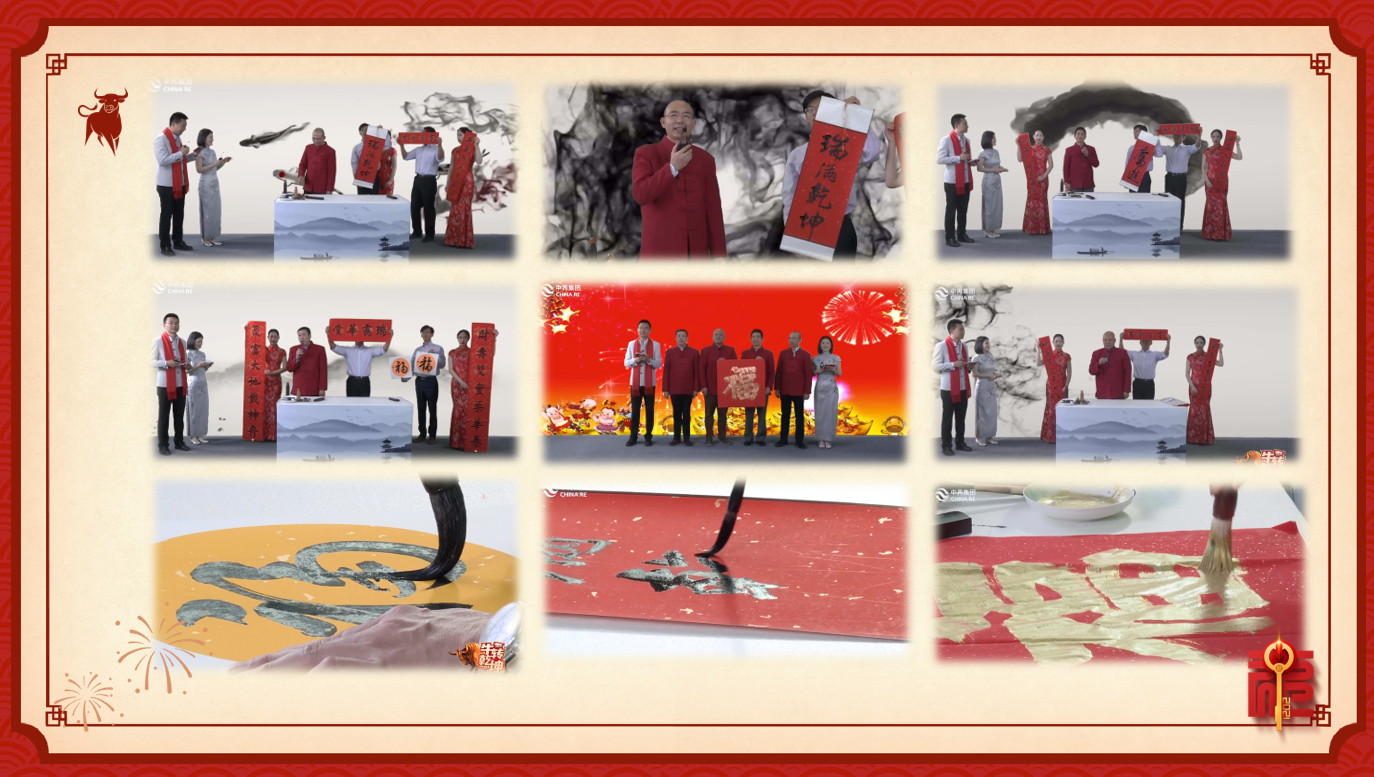 An explosive dance brought everyone into the “digital age” of China Re. The song “Love China, Love the Earth” expressed the common aspirations that China Re people live and strive for the country. The “Heart Changes” micro-video showed us the dedication of the Group’s poverty alleviation assistance staff at designated areas, as well as the intensively assisting role of helping the poor getting confidence, changing people’s hearts and getting rid of poverty. In the national song and dance of “Salar Spring”, we came across the deep gratitude of a tiny ethnic group for the Party’s poverty alleviation policy and the boundless yearning for a new life of common prosperity. The “Standing Firm in 2020” micro-video, showed every ordinary worker of China Re Group in their ordinary posts, sticking to their original aspirations, remaining at their stations, dedicating themselves, achieving others, and contributing to the prevention and control of the epidemic as well as the resumption of work and production. The affectionate duet of “Let the world be filled with love” expressed the blessings of all China Re people for the prosperity of the motherland and for the unity and love of the people of all ethnic groups, joining hands to enter a well-off society and embarking on the second centenary journey with tender expectations. The “Young China Re Story” issued a declaration of passion for the young generation, allowing us to witness the high-motivated, vigorous and fearless spirit of the new generation. 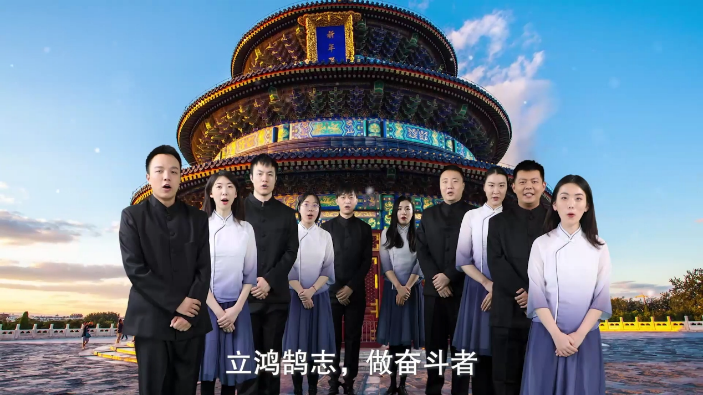 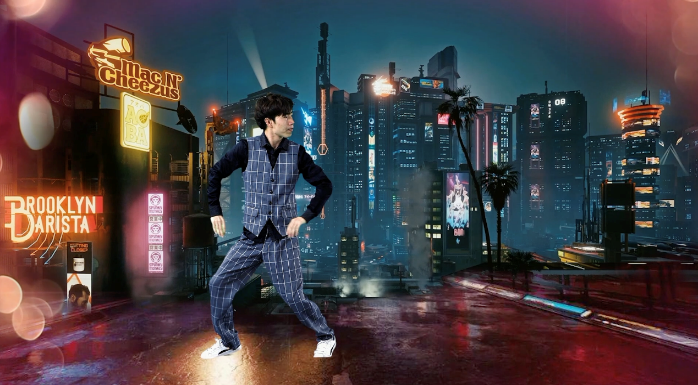 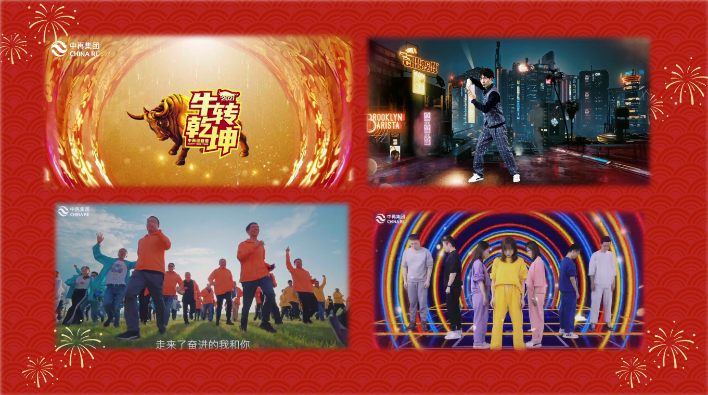 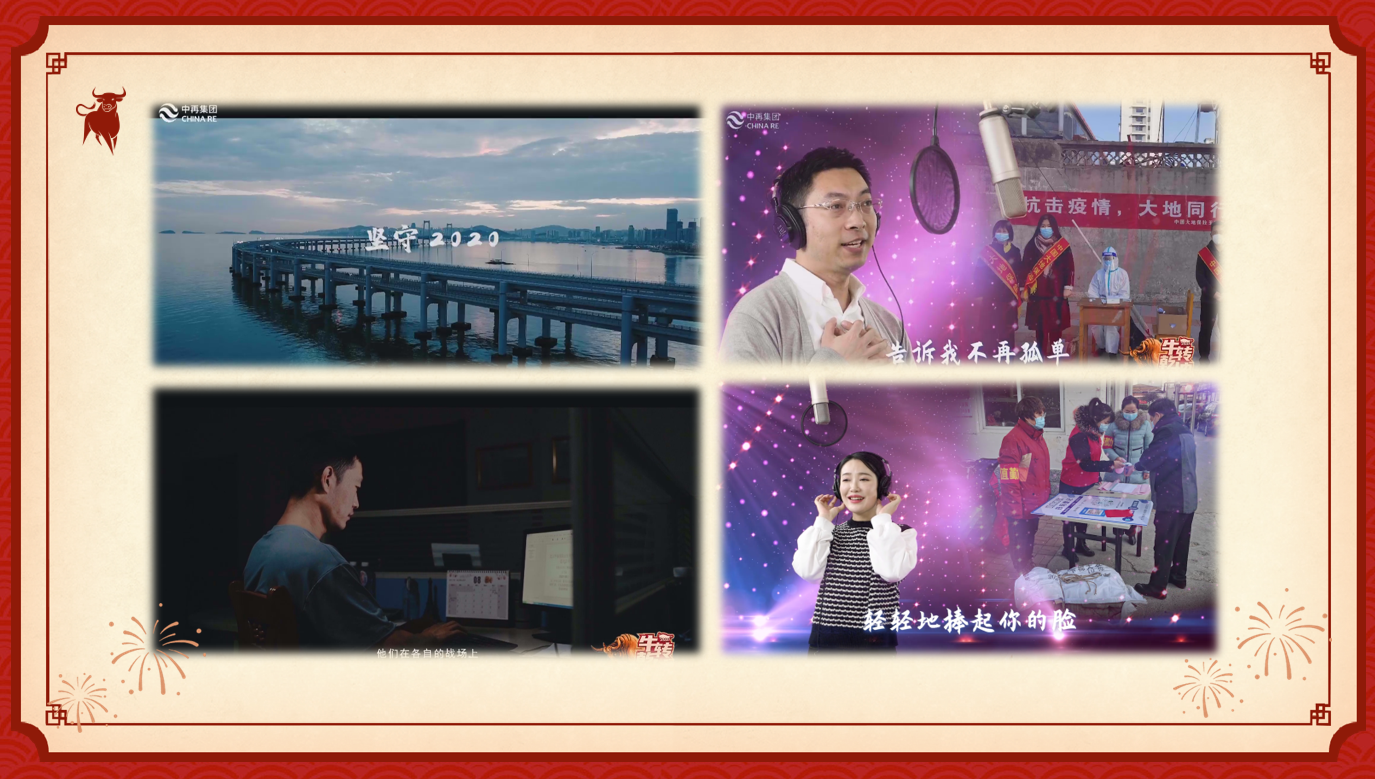 The “Voice of China Re Chorus” sung the song “The Sea of Stars”, pushing the gala event to a climax, with the boat of China Re Group, under the glorious guidance of the Party, cutting through the waves and chasing the light, setting sail for sustainable development in the great revival of the Chinese nation. 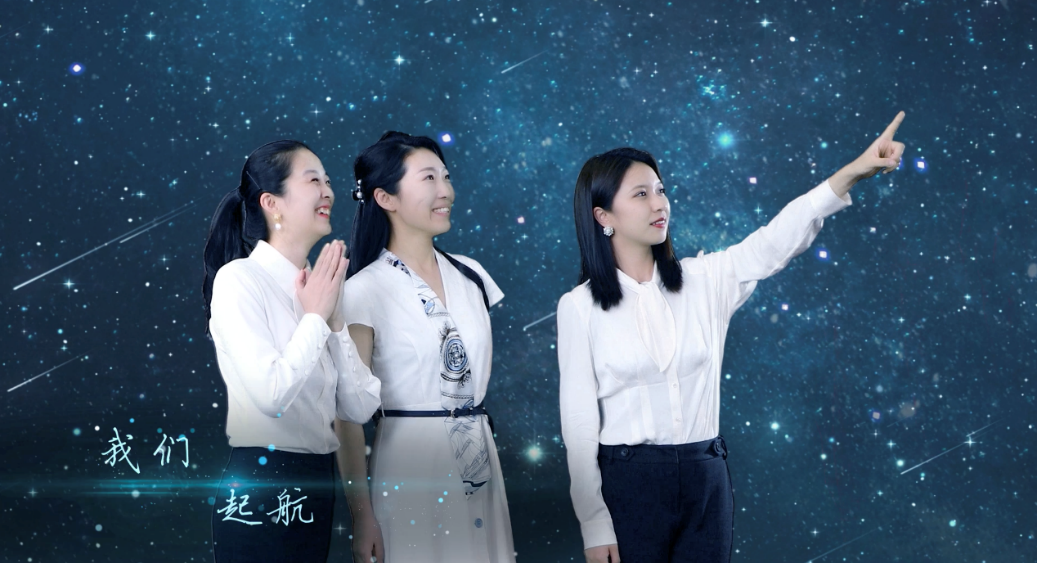 The format of this event was innovative, and the previous offline stage of limited space was moved to the Internet. For the first time, it covered more than 60,000 employees of the Group system at home and abroad, in addition to their family members, business partners and financial unions of the Group companies as well as associate organisations from the CIC system who watched the live broadcast. During the one-hour live broadcast, a total of 148,000 people were watching online, creating a record of viewing and sharing China Re Group’s live events.

In order to continue to expand their influence and publicity, and actively create an ambience for the Spring Festival holidays, unions from the Group system continued to replay the video of this gala event on the network platform before and after the Spring Festival, so that those employees who were not able to watch and participate in the event due to work and other reasons could have an experience of the event, enjoy the cultural feast of China Re, and appreciate the warmth of the China Re family.

In addition, in accordance with the normalised epidemic prevention and control requirements, during the Spring Festival, grass-root labour unions of all units of China Re Group arranged and organised cultural and sports activities and festival events in various forms to facilitate employees to stay at home and celebrate the Chinese New Year, allowing the people of China Re celebrate a different and wonderful Chinese New Year of the Ox! 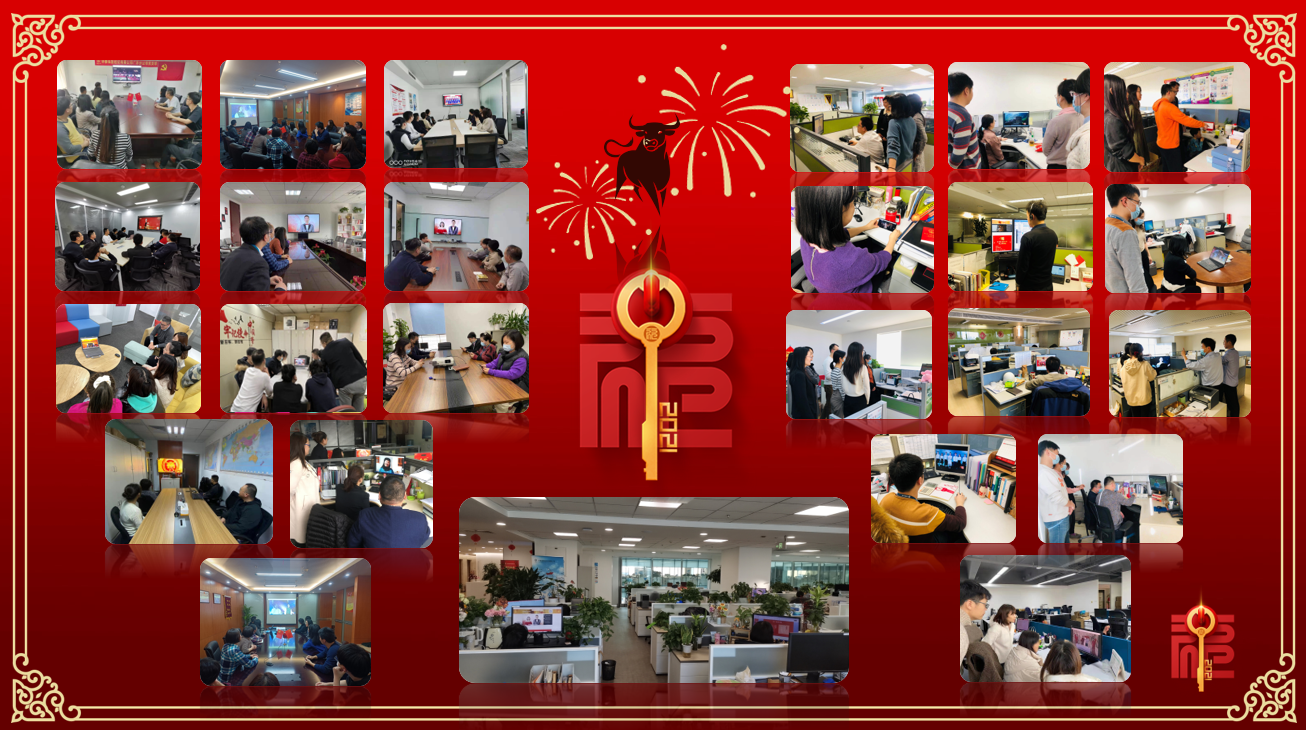