China RE UK was included in the Tou Ying Tracker 2018 The report showed that the top 30 Chinese enterprises chosen from 750 enterprises had a combined turnover of £43.0 billion, representing a year-on-year growth of 66%. As a representative from the financial industry, China RE UK was included in the list together with Alipay (UK), China Mobile International (UK), China Unicom (Europe) and State Grid Europe Ltd from manufacturing, industrial, technology, media and telecommunication sectors.

Ms. Chen Wen, Minister of the Embassy of China in the UK, presented the certificates to the representatives of China RE UK and other awardees, and congratulated the top 30 enterprises on behalf of Mr. Liu Xiaoming, Ambassador of China in the UK. In her speech, Minister Chen Wen also stated that the successful acquisition of 100% equity interest in the UK holding company of Chaucer by China Re Group is one of the best practices in financial service sector between China and the UK. 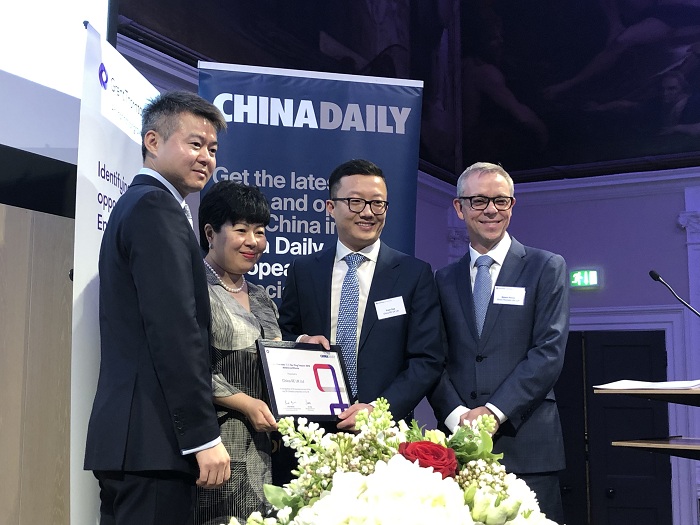 After China Re Group announced the acquisition of Chaucer, in various events including the “2019 Chinese New Year Dinner of the 48 Group Club”, the “2019 Chinese New Year Dinner of the UK Conservative Party” and the “Conservative China Group House of Commons Breakfast”, Mr. Liu Xiao Ming, Ambassador of China in the UK, stated for several times that the successful acquisition of Chaucer by China Re Group is the new highlight in the cooperation between China and the UK in the insurance and financial industries. Ambassador Liu Xiaoming pointed out that the acquisition by China Re Group was a major move to support national strategies, lead the development of insurance and reinsurance industries in China and facilitate the implementation of its internationalization strategy, which was highly recognized by the governments and financial industries of China and the UK.