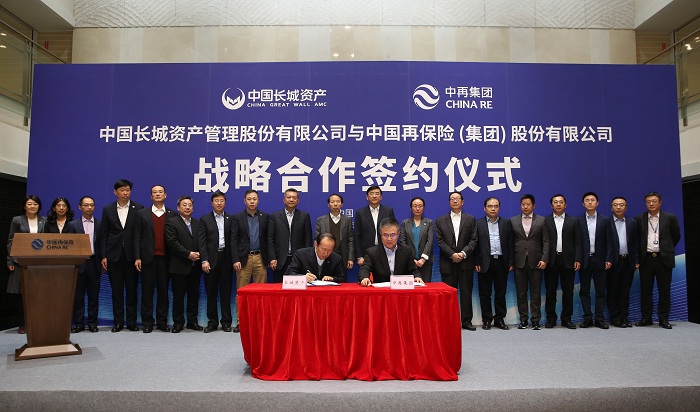 Before the signing ceremony, representatives of the two parties had a friendly talk. Yuan Linjiang, Chairman of China Re Group, described the operation development and implementation of strategies of China Re Group, stated that in 2018, China Re Group successfully improved its market ranking and completed the overseas acquisition of Chaucer Insurance Group in the UK. He highlighted that in 2019, China Re will focus on three major strategies, namely, platform operation, technology advancement and globalization, facilitate the implementation of the “One-Three-Five” Strategy and adhere to China Re’s strategy of high quality development. Shen Xiaoming, Chairman of Great Wall Asset, was confident on the future development of China Re Group. He spoke highly of the long-term friendly cooperation between China Re Group and Great Wall Asset, and pointed out that Great Wall Asset will focus on its main business of asset management to maintain high quality and stable development in the future.

Both parties agreed that in the future, they will emphasize on deepening business cooperation in financial market service, insurance product innovation and asset operation and disposal, strengthen the depth and breadth of cooperation between the two parties to share resources and complementary advantages, thereby providing greater support to national strategies and the development of real economy.